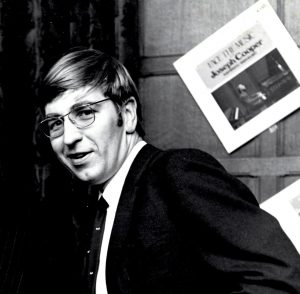 It is with profound sadness that we announce the death of Founding Director, and, most importantly, our father, Graham Pauncefort, who passed away on New Year’s Eve 2021, aged 81.

As we look to fill industry-great boots and take CRD into its next chapter, we would like to take this opportunity to offer a personal take on a life’s work. (For a fuller write-up, we direct you to James Jolly’s obituary in Gramophone.)

After meeting The Beatles pre-fame and working for Deutsche Grammophon, Dad set up Continental Record Distributors in 1965 to import and distribute specialised continental and American catalogues. After early success, he decided to establish his own classical catalogue and in 1973, Dad launched the record label arm of CRD. He remained at its helm throughout its 58 year history and oversaw the growth of the catalogue to over 200 titles of which many are ‘recording firsts’.

Dad was one of the few industry figures left who had successfully navigated ­– pioneering at each step – the transition from vinyl, cassette, CD, and then finally to digital channels.

Dad’s vision for CRD was clear from the outset: to record interesting and unjustly neglected works, to seek out outstanding young artists, and to record standard classics where he felt a new approach could be justified.

Dad was the forerunner of independent classical labels and independent distribution, influencing much of the British musical landscape. He had an encyclopaedic knowledge of the classical canon, as well as a fervent interest for lesser-known and newly composed works. He could, as he would tell us, ‘hear the Malvern Hills’ in Elgar and relay with extraordinary detail the historical and recording information of every track released on his watch.

We have been overwhelmed by the myriad messages expressing how sorely Dad will be missed by those who served in the CRD family as well as those across the industry more broadly.

We will now be redoubling our efforts to keep to an ambitious programme of releases in 2022, the first of which will be Resurrexi! Easter in Vienna with Mozart and the Haydn Brothers with the Choir of Keble College, Oxford, and the Instruments of Time & Truth, joined by superb soloists, in April this year. We will also be celebrating the work of artists past and present at every opportunity. This is the role of the C21st record label.

Back in September 2006, Dad ended his feature piece for International Record Review headed ‘Too Many Records’ as follows:

“The record business is undergoing significant changes as the growth of multimedia forms increases, so perhaps in the future nobody will ‘complain’ about having too many records. I am just grateful to have had the opportunity of spending my entire working life in the ‘Industry of Human Happiness’. “

The record business continues to ‘undergo significant changes’. We will be working hard this year and beyond to leverage the opportunities offered by the digital transformation and to do what Dad always set out to do: to support emerging and existing artists to further their careers whilst delighting audiences old and new with the best of what the ‘Industry of Human Happiness’ has to offer.